The Case for "Teacher Training" in NYS Public Schools 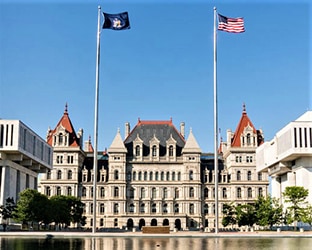 Allergies come in all shapes and sizes ...

Just like allergy sufferers. And they are on the rise. For many people allergies can range from sniffling and sneezing to skin rashes to gastrointestinal issues. A certain percentage, however, have more than these uncomfortable symptoms to deal with. Anaphylaxis, a serious life-threatening reaction, causes approximately 1,500 deaths a year in the United States alone. Clearly, allergies are nothing to sneeze at!

Imagine you're the parent of a toddler with a life threatening peanut allergy. Imagine your concern, anxiousness and daily vigilance as you try to keep your child safe. Now imagine there was a therapy that helped desensitize your peanut-allergic little one so that an encounter with a peanut wasn’t fatal. We might not have to imagine much longer. Sublingual immunotherapy (SLIT) has been referred to as “super promising” by Dr. Edwin Kim, an assistant professor of allergy and immunology at the University of North Carolina at Chapel Hill and the study’s lead author.

“What we are seeing is super-promising,” says lead study author Dr. Edwin Kim, an assistant professor of allergy and immunology at the University of North Carolina at Chapel Hill. “We observed significant desensitization in toddlers with peanut allergy,” he told Allergic Living.

A child develops anaphylaxis and is rushed to the emergency room. At the time the child is stabilized and released, a physician writes a prescription for an epinephrine auto-injector (EAI) which a staffer eventually hands to the accompanying adult, sending them on their way. But how many of those prescriptions are actually filled and by whom?

A recent study published in Allergy and Asthma Proceedings aimed at measuring those fill rates while looking for racial and socioeconomic disparities.

What if the “cure” for some autoimmune allergies like asthma and life threatening anaphylaxis could be found in our own bodies? That is what researchers from the Australian National University (ANU) may have discovered in the protein called neuritin. The role of this natural protein plays in the brain and nervous system has been known for years but five years ago researchers began to look at the role it may play in the immune system. The results are promising and researchers hope that they may be the basis for new treatments.

Researchers have discovered a function in the immune system that could hold the key to treating allergic conditions like asthma and stop life-threatening anaphylaxis.

Experts from The Australian National University (ANU) have unearthed a natural way the body prevents autoimmune disease and allergies. The process is driven by a protein in the body called neuritin.

Find out about the upcoming sessions that walk you through what to do to save your own life or that of a loved one in the event of an anaphylaxis emergency.