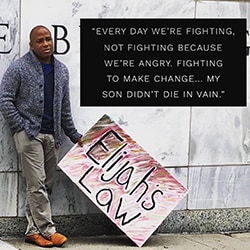 After a preschool ignored written and verbal instructions about his food allergies and asthma, Elijah-Alavi Affiq Thomas Silvera died in 2017. When faced with the tragedy of losing his son Elijah, Thomas Silvera embarked on a mission to help ensure that no other family would have to experience a similar tragedy.... Continue here.

Working for allergy friendly legislation waits for nothing, including a pandemic. Join your fellow allergy advocates for the annual trip to Albany, virtual this year, to ask your legislators to support bills we need to support our friends and families manage their life threatening allergies. Click to find out about the legislation we'll be encouraging our legislators to sponsor and to register. We look forward to seeing you.

Allergies come in all shapes and sizes ...

Just like allergy sufferers. And they are on the rise. For many people allergies can range from sniffling and sneezing to skin rashes to gastrointestinal issues. A certain percentage, however, have more than these uncomfortable symptoms to deal with. Anaphylaxis, a serious life-threatening reaction, causes approximately 1,500 deaths a year in the United States alone. Clearly, allergies are nothing to sneeze at!

Sometimes more is better. When it comes to food labeling, if you suffer from a potentially life threatening allergy, more information isn’t just better, it could be life-saving. That is what the new legislation — the Food Allergy, Safety, Treatment, Education, and Research (FASTER) Act, H.R. 1202/S. 578 would do. Having already passed by the Senate, this legislation would improve transparency by requiring that sesame — which is commonly used in food for flavoring — be labeled as an allergen on packaged foods. Read here to learn more about this vital legislation.

Passage of FASTER Act is Critical for Food Allergy Community!

By Lisa Gable, opinion contributor —
04/06/21
The views expressed by contributors are their own and not the view of The Hill.

In the United States, 85 million people are impacted by food allergies or intolerances, of which 32 million have a potentially life-threatening condition. Sadly, they live each day with the fear and anxiety that something they eat could turn their world upside down. Always on alert, they know that consuming the wrong food or ingredient could send them straight to the emergency room or worse, could kill them.

When a person experiences an anaphylaxis attack, an epinephrine auto-injector is how treatment is provided. Now what if there was an easier, maybe even more effective way to administer epinephrine? That is what Aquestive Therapeutics is currently working on. Their surveys indicate that the majority of patients would be interested in replacing their current medical device with a sublingual emergency epinephrine and that it would be easier to administer during an emergency situation when compared to their current medical device.

Aquestive Therapeutics held an investor webcast yesterday to update the public on the current status of their sublingual emergency epinephrine candidate. Rather than a jab to the thigh with an auto-injector when anaphylaxis is suspected, the company hopes to offer a small strip that when placed under the tongue, releases epinephrine as it dissolves.

With Summer comes warm weather and with warm weather comes Bees, along with other insects, wasps, yellow jackets. Insect stings are painful, annoying and possibly life threatening. What to do if you get stung? How do I know if I’m having an allergic reaction (5% of the population is allergic to insects) and how do I prevent stings? The answers to these and other questions can be found in the following article.

You may not be aware of an allergy until you're stung.

Summer's the season for gardening, playing outside, back yard picnics and just enjoying the outdoors. It's also the season of bee and other insect stings. According to the American College of Allergy, Asthma & Immunology, about 5% of the population is allergic to insect stings. But most people aren't aware of their allergy until they're stung.

Find out about the upcoming sessions that walk you through what to do to save your own life or that of a loved one in the event of an anaphylaxis emergency.